International Mine Countermeasures Cooperation in the Baltic Sea 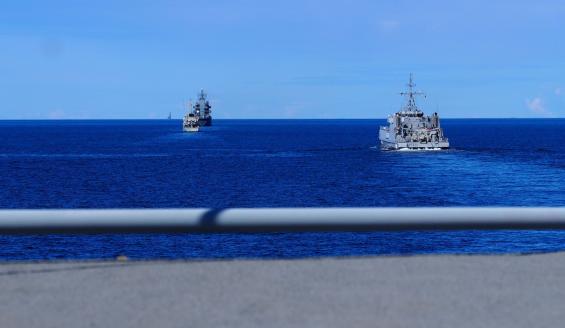 This year, the Coastal Fleet and the Standing NATO Mine Countermeasures Group 1 will conduct more cooperation than usual to develop mine countermeasures methods and know-how in the Baltic Sea region. Combined training events are largely based on Katanpää-class mine countermeasures vessels being committed to the NATO Response Force’s Follow On Forces Group for 2020.

The Coastal Fleet’s 4th Mine Countermeasures Squadron, as its name indicates, concentrates on the maintenance and development of mine countermeasures capabilities at sea. The Squadron’s most important vessels, three Katanpää class mine countermeasures vessels are state of the art also by international standards when it comes to their technical equipment.

- We are a desired partner in international exercises because we have, in addition to modern vessels and versatile sensors operated from them, a staff with advanced training, motivated and committed to their tasks who are always willing to learn new skills and able to share their know how with other professionals in the same field, says the Commander of the Mine Countermeasures Squadron, Commander Juhani Lehtimäki.

The Coastal Fleet has long conducted cooperation with the Standing NATO Mine Countermeasures Group 1 (SNMCMG1). SNMCMG1 consists of mine countermeasures vessels of NATO member nations’ navies committed to the NATO Response Force for six months at a time. 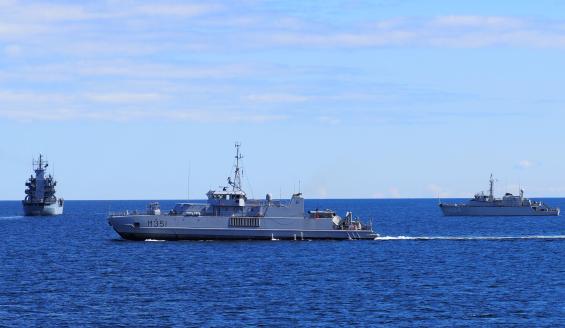 Currently, the SNMCMG1 comprises six vessels with the flagship FGS Donau. The other participating vessels are the Norwegian HNOMS Otra, the French FS Andromede, Dutch HNLMS Willemstad, German FGS Groemitz and the Belgian BNS Lobelia. The SNMCMG1 changes commander and commander’s staff on a periodic basis. It is currently commanded by Commander Henning Knudsen-Hauge of the Royal Norwegian Navy.

The most recent combined PASSEX (Passing Exercise) was conducted at the Archipelago Sea early this week. The two-day exercise consisted of smaller exercises focusing, in addition to mine countermeasures operations, also on seamanship and coastal navigation.

- The PASSEX was planned taking into account the restrictions imposed by the coronavirus situation, so that the crews did not come to close contact with one another, Commander Lehtimäki emphasises.

For the Katanpää class mine countermeasures vessel MHC Purunpää, the PASSEX served as a dry run before a longer exercise period planned with SNMCMG1 the following summer. The exercise was useful indeed as it showed how things were done when operating in the SNMCMG1. Connections were opened up and maritime logistics trained.

Lehtimäki and his squadron were happy because this training event could be executed; due to the coronavirus epidemic, most international exercises for this spring have been cancelled. Even so, careful consideration was given to this event as well. But at sea, it is easy to contain activities so as not to allow for close contacts.

- Each crew stayed on their own vessel, Lehtimäki states.

For the 4th Mine Countermeasures Squadron, the PASSEX held in April was an important part of getting ready for a longer combined exercise period planned to take place later this year.

According to plans, MHC Purunpää and MHC Vahterpää will take turns training together with SNMCMG1 a few weeks in the summer and autumn respectively. Combined training is aimed at enhancing the Squadron’s mine countermeasures competence and cooperation with international mine countermeasures units.

The 4th Mine Countermeasures Squadron has a history of training with the SNMCMG1.

- These past years, the SNMCMG1 has visited Finland several times. In conjunction with these visits, we have always strived to conduct PASSEX exercises together as well, Commander Lehtimäki says. 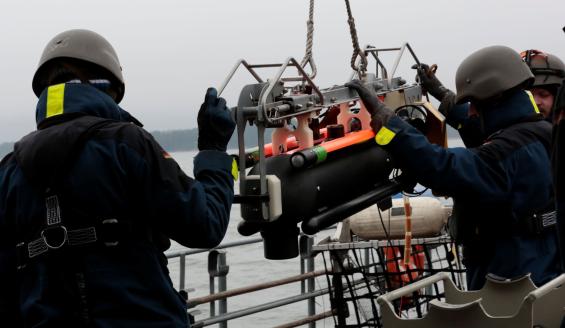 Crew preparing a minehunter  on a German vessel Ocotber 2019 on the Archipelago Sea. Photo: Defence Forces.

Cooperation with the SNMCMG1 has intensified during the past years as the Squadron has been preparing to get ready to be placed to the NATO Response Force Follow On Forces Group. For example, last year, the Squadron conducted exchanges deploying personnel to the SNMCMG1 staff on the flag ship for periods of about six weeks at a time to gain practical experience of how the Mine Countermeasures Group operated.

Mine countermeasures vessel Vahterpää participated in the Northern Coasts 2019 exercise held in the autumn as a part of the SNMCMG1 in the southern Baltic Sea for three weeks.

- The exchanges of personnel and the Northern Coasts exercise gave us good practical experience of the operation of the SNMCMG1. 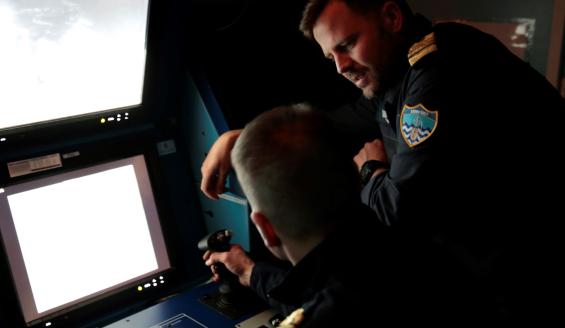 Norwegian Commander introducing their systems to Finnish colleague on a Norwegian vessel in October 2019 on the Archipelago Sea. Photo: Defence Forces.

One of last year’s intensive combined events was the SNMCMG1’s visit to Turku at the end of October that ended with the 4th Mine Countermeasures Squadron conducting a PASSEX with it. It was a practical exercise allowing operators to acquaint themselves with procedures in use on other vessels.

- The systems and equipment used in mine countermeasures operations are similar to a great extent regardless of which country’s flag the vessel is sailing under. Operations are based on the same theory and principles, but depending on operators’ experience, differences exist. You strive to introduce the best practices from these differing ways of operating into your own operations, Lehtimäki says.

- Mine countermeasures operations in Finland’s challenging environmental circumstances call for versatile and high-quality systems. To operate these systems, we need competent personnel to generate real capability. The 4th Mine Countermeasures Squadron is one of its kind in this field of expertise. For us, it is not enough to the best in Finland: we want to be top notch by international standards as well and this is why we need to go abroad to seek skills and know how. This is our way of improving our operation and making our best contribution to the Navy striving to fulfil its tasks, Lehtimäki concludes. 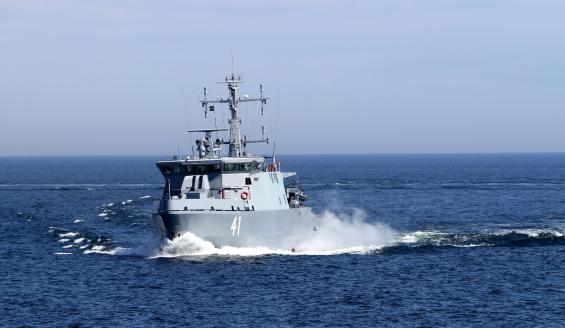