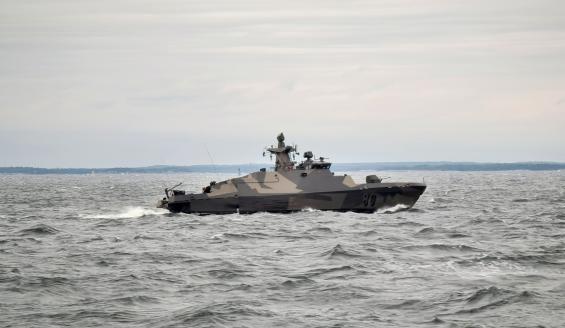 Two Hamina-class fast-attack craft of the Finnish Navy will take part in the Marinens vårövning exercise organised by the Swedish Navy 4-8 April 2022 off the east coast of Sweden.

The Finnish units’ objective in the exercise is to enhance, in addition to interoperability between the two countries, also the Finnish units’ competence in anti-submarine warfare.   The participating vessels, Hamina-class fast-attack craft Hamina and Hanko have undergone an extensive overhaul which gave the vessels more versatile capabilities for anti-submarine warfare.

- This excerise is a good example of how fruitful the cooperation between the Finnish and Swedish Navies is.   This exercise provides a good opportunity for Finland to improve the personnel’s competence extensively in mastering the modernised capabilities of the Hamina class, because the exercise comprises various components, for example operating with helicopters, which enables more versatile training than in Finland, says the Chief of Staff of the Coastal Fleet, Commander Mikko Villikari.

Marinens vårövning is an annual exercise organized by the Swedish Navy to which the Finnish Navy has been invited.  In addition to its Navy troops, Sweden will also send anti-submarine warfare capable Air Force helicopters to the exercise.

-The Finnish vessels will operate in exercise tasks under the Commander of the 4th Naval Warfare Flotilla of the Swedish Navy.  This is a natural part of the Navies’ cooperation, and it contributes to our participating vessels’ ability to operate as part of a multinational naval force, Commander Villikari says.